Fairy wrens, eh?  Are they naughty or what?

Famously described by Sir David Attenborough as “the most promiscuous bird known”, much research has been done into the convoluted and apparently quite permissive sex-lives of these rather adorable tiny blue birds and their little brown lady friends.  Both sexes of superb fairy wrens (Malurus cyaneus) are socially monogamous (staying in the same partnerships), but sexually promiscuous (self-explanatory).

Whilst I could tell many entertaining anecdotes about the louche behaviour of fairy wrens, my favourite one, which I learnt about in a short piece by Mary Kille in edition 55 of Yellowthroat (newsletter of Birds Tasmania), regards the peculiar practice of furgling.

Furgling (anecdotally, a word which is a portmanteau of burgling and something else risqué that starts with ‘F’), is a practice known from several species of wrens, which involves the exchange of floral tributes for sexual favours.  Whilst in humans, these exchanges are traditionally male-to-female in nature, in fairy wrens, it’s strictly men’s business.

Fairy wrens live in family groups where there is usually one dominant male, identified by his brilliant blue breeding plumage, who is accompanied by a number of females and immature birds of both sexes.

Say you are a young, good-looking, virile blue wren fellow, who is yet to acquire a harem of his own.  Say you chance upon a harem that belongs to someone else, and you have taken a fancy to one of the lady wrens within it.  You cannot just go up to her and ask her for her phone number.  She has a boyfriend, and there are protocols which must be followed. 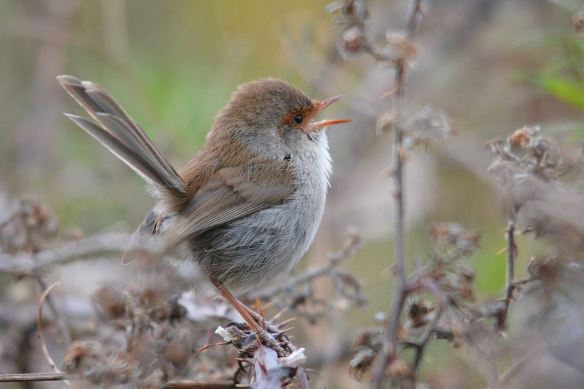 You pluck a petal from a lovely flower.  Let’s say it was a forget-me-not.  You take this petal to her boyfriend, and offer it to him, in exchange for some sexy-time with his lady-friend.  He scoffs at your offering, questions your ancestry, and chases you out of his territory.

But you are not dissuaded.  You pluck another petal, this time, a pretty yellow one, and bravely return to offer it to the dominant male.  This time, he accepts your efforts, and you are allowed a quick furgle with one of his ladies.  The petal indicates that you want no trouble – you’re not here for his territory or his harem, and will move along after the, ah, transaction, has taken place.

DNA tests have shown that within fairy wren clutches, often very few of the offspring are actually directly sired by the dominant male.

“Why, these babies are adorable! Are they mine?”

Once again, all of the photos featured in this blog post were gifted by some of the talented bird-people of the Facebook group Tasmanian Bird Sightings and Photography – thanks Mick and Charlie!  Thanks also to Eric Woehler, from Birdlife Tasmania, for helping me find that elusive article.